PORTRAITS OF AN ARTIST--A Must Read 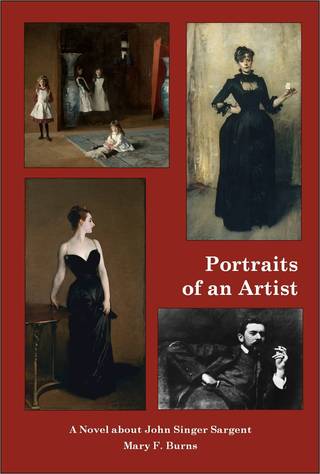 PORTRAITS OF AN ARTIST by Mary Burns
This week I interview Mary Burns, author of PORTRAITS OF AN ARTIST, a wonderful historical novel about the painter John Singer Sargent. I consider it one of the best historical novels I've ever read. Ms. Burns embedded photos of some of Sanger's work along with some of her own work in her answers to my questions. Unfortunately, I was unable to make them transfer to this blog. Chalk that up to my technical ineptness.

You can read more about Mary at http://www.maryfburns.com

1. You have a background as a lawyer, but you have obviously developed an interest in art along the way. Are you a painter?
I studied art in high school and college, and really loved painting watercolors as well as doing pen and ink drawings, but I haven’t done anything in years. And, other than literature classes, Art History was my favorite subject in college. Lately, though, I’ve been making stained glass windows—I just finished the final window in a “Four Seasons” series that I started about six years ago.

2. What was your inspiration for writing PORTRAITS OF AN ARTIST? (I saw your answer on Amazon but want to include it here.)
I saw a huge exhibit of Sargent paintings in Washington, D.C. in 1999. I was not familiar with his work. The painting that intrigued me the most was the enormous (7 x 7 foot) “Portraits d’Enfants”, also known as the “Daughters of Edward Darley Boit.” Seen in person, up close, the painting is haunting and mysterious, with heavily laid-on swashes of pure white paint that leap out of the utter darkness of shadows in the background. The oldest daughter, Florence—I was to learn all their names in time—is more in shadow than light, her face not even visible. I remember thinking, what kind of portrait is that? In fact, it wasn’t even clear that the two girls standing in the back (next to Florence is Jane) are “daughters”—they’re dressed more like servants, with the younger two girls—Mary Louisa standing with her arms “at ease” and baby Julia on the floor—looking like stiff, dressed-up dolls. I kept thinking, there’s a story here, there’s some dark, uncanny, psychological tale hidden—and exposed—by all this paint. Who was this artist, and why did he paint a portrait like this?

3. I loved the format you used of writing about Sargent from the viewpoint of the subjects of his paintings. What made you think of using this technique?
My first draft of Portraits of an Artist was written in “close” third-person. It was solid writing, I thought, but frankly, a little boring. There was a sort of relentless forward motion that was rather tiresome. So I re-wrote it. I briefly tried a First Person POV with one of the major characters, Violet Paget, who was a long-time friend of Sargent’s, but then the book became all about her, which was not what I wanted. Then I wrote it with Sargent as the teller of the tale. It didn’t take very long to realize that that was very restricting, although his First Person voice brought a great deal more vivacity and immediacy to the story. It was easier to care about Sargent and what he was going through—but he had to be in every scene! I couldn’t reveal what other people thought about him, or felt about him, and that—it became clear to me—was turning out to be the essence of my book: how to understand a mostly inscrutable, intensely private person who nonetheless was a huge success in the art world of the late 19th century. Having written the whole book from Sargent’s POV, though, was a very fruitful exercise, as I now felt I was thoroughly in his head—I had mapped his motivations, his feelings, his responses, so I really, really knew him. I pondered the notion of having multiple First Person voices, and then it hit me: the portraits would be the characters! They would tell the story of Sargent, from their points of view—each with his or her own voice—reliable or unreliable—vain, sincere, spiteful, honest, blinded by love or lust—and from those “portraits” of Sargent by his own “portraits”, the reader would be able to hear and understand the impact that Sargent had on all those people—lovers, friends, teachers, clients, judges—and infer some sense of who the man himself had been.

4. You obviously did an incredible amount of research on Sargent, his subjects, and his paintings. Did you use books, interviews, the Internet? Did you travel to Paris for research?
Sadly, when I actually was in Paris back in 2000, this book was so far from my mind that I didn’t even think to visit places Sargent lived in or had frequented. But the memories were there when I finally did determine to write the book. I read TONS of biographies, of Sargent as well as his contemporaries and friends, and bought lots of beautiful art books, put together by Sargent’s great-nephew, Richard Ormon, who lives in London and is the “keeper” of the Sargent flame. The internet was, of course, invaluable, particularly one site – www.jssgallery.org – which has almost every painting Sargent ever painted, and where it is located today. I still have the stack of books I used in a corner of my office.

5. Florence is such an enigma in the story. Tell us a little of what you know about her in real life.
I actually knew very little about Florence and her sisters when I wrote my book. The story about her in the novel is completely made up, as are the excerpts from her diary. When I was finished with the final manuscript, a non-fiction book titled “Sargent’s Daughters” came out, written by the Boston Museum of Fine Arts American Arts curator, Erica Hirshler, and I bought it instantly and devoured it. Incredibly, how I had portrayed the four girls, especially Florence, was not at all at odds with their real lives. Florence was a rather odd duck, never evincing the slightest interest in marrying or attending the usual social events. She was an avid player of the relatively new sport of golf—which she introduced to the Boston area, inspiring the local rich folks to build a course at a country club in Newport. She and a cousin, Jane Boit Patten, nicknamed “Pat” to distinguish her from the innumerable Jane’s and Jeanie’s in the family, became fast friends and in later years, lived in what was called a “Boston marriage”, two spinster ladies living together.

6. Who is your favorite character in the story aside from Sargent himself?
Violet Paget, without a doubt. I loved her! I read two biographies of her, and numerous letters as well as parts of her own writing, under her pen name Vernon Lee. She seemed to me a charming mix of naivete, intellectualism, feistiness and good humor. She and Sargent were the best of friends throughout their lives.

7. Which of Sargent’s paintings is your favorite and why?
There are so many! But I have to say that, for now, I’m in love with “Carnation, Lily, Lily, Rose” (below) – which is the painting that ‘ends’ my novel.

8. Do you own any Sargent paintings or prints?
Sadly, no. I wish!

9. I loved the novel, and I hope you’ll write another with art and an artist as the subject. Do you have any plans for this?
I’m thinking of doing something with Gustave Caillebotte, another “impressionist”, a little older than Sargent, who painted the unbelievably stunning “Rainy Street in Paris” which is at the Art Institute of Chicago (where I grew up, and visited it regularly!).

10. What are you working on now?
Actually, I’m working on being the webmaster for the Historical Novel Society Conference in June in St. Petersburg, Florida (www.hns-conference.org) which is taking up a lot of time right now! Plus author events and such for my book. But I have started a couple of different things that are very different from either of my two historicals, although I’m not prepared to say much about them at this time!
Read More
Be the first to comment